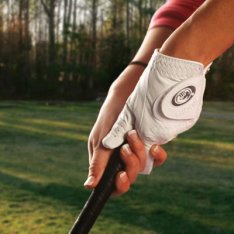 lutch shots are key in the world of professional sports. Adam Scott is wearing the green jacket after his pivotal shots at the Masters yesterday. But I am absolutely 100% certain that if I ever had the skills to put me in that realm of sports, my spaz hands would see to it that no victory would come my way.

No sunken putt to clinch the tournament.

Of course, just imagining I had the physical prowess to get to such a level is silly, but even if that was all in place, my spaz hands would ensure that I could never achieve such glory. Are you familiar with spaz hands? Well, how about jazz hands? You know, the flashing little palms upright move that adds a little panache to just about anything?

(I have no intent to PR this show—it was just the best short version of “jazz hands” I could find on YouTube. And trust me, there were some “interesting” choices!)

For me, spaz hands is like a distant cousin seventeen times removed. It’s that energy that courses through my body when I get to thinking too much in such situations, and then it hits like lightning, thereby ensuring a spastic burst when the exact opposite is needed.

So if I was indeed lined up to try for that 300 game in bowling and it came down to the last ball…I’m pretty certain my spaz hands would strike—no, not cause me to roll a strike…but come upon me and cause me to throw the ball directly into the gutter. Maybe even overhand. Cause that’s how I roll. Literally.

And my spaz hands aren’t just involved in sports. Ask my husband what it’s like to walk into a room where my back is turned. Let’s just say I’m a little jumpy. He’ll often turn the lights off and on upon entering to give me a heads up, or lately he’s taken to walking in while gently saying, “I live here…I’m your husband…don’t be startled…” Poor guy. But I just can’t help it.

As long as I have this “special” quality, it would be awesome if it burned off a bunch of calories. After all, if reaching your target heart rate is the point of cardio, then like Ellen DeGeneres says, you should be able to just stand in front of an oncoming bus to achieve maximum results. Or, for me, have someone sneak up on me. And by “sneak up,” I mean just normally walk into a room. That should do the trick.

On the bright side, if there ever was a burglar who came upon me, I just might be able to spaz hand him into submission—you know, just like a Taser, but with flailing arms of hysteria. Shut up. It could happen.

Oh, well—I’m a spaz. It’s just another nuance of the special crazy that I am. What’s a part of your special crazy?