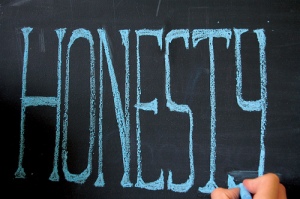 I am a huge fan of honesty. If there was an honesty fan club, I think I might even run for vice president (president would be too much work—I’m just setting my hypothetical goals realistically). I’ve noticed several people lately, though, speak of themselves as being “brutally honest.”

I’m not such a fan of that.

It seems to me to be an attempt to cloak rudeness and a lack of compassion as a virtue that isn’t merited.

I can’t believe I’m about to incorporate the TV show “The Bachelor” into one of my posts, but…here I go. Recently the reality TV world was caught by storm by the charismatic Juan Pablo. He was supposed to be this great catch—a loving single father with a great body and a suave personality.

And a whole lot of heart, right?

At least not the way I saw it. Time after time, he would say things that ranged from not nice to flat out offensive and couch it as honesty. “I’m just being honest…” was a frequent phrase that slipped out of his mouth after words that were, if not hurtful, certainly not a feel-good. 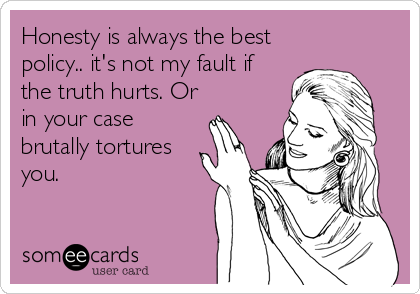 I think I might feel less frustration with Juan Pablo’s attitude if he could take what he dished out, but it certainly didn’t come off that way. When two of the women had critical things to say of him, he either ignored their comments or said his other catch phrase of “It’s okay…” and then, when they were out of earshot, made a cutting remark about each of them. Don’t use a shield of “honesty” if it only works one way. (I say this aware of the way reality TV can craft a story through editing. Perhaps JP had moments that we didn’t see that showed him in a kinder light, but seeing him speak live, I think giving this benefit of the doubt is a reach.)

Saying whatever you want without a filter and then chalking it up to honesty isn’t okay.

And, conversely, NOT saying whatever you want without a filter doesn’t equal dishonesty. We get that, right?

This doesn’t mean that one should not speak the truth in love, but we need to remember the “in love” part, don’t you think?

In this era of amazingly hurtful and hateful comments on the Internet, I am worried that we are touting brutal honesty as a positive when all it really is is…brutal.

I see this in “real” life, too. Over the weekend, an acquaintance of mine—a really nice guy—turned and said to a young woman, “You have lipstick on! It looks good.” She beamed, and then he continued, “You know, your lips are too thin.” She immediately looked down and agreed with him, tried to explain what she does to overcome it, and then walked away.

He saw the WTF? look on my face and said, “I can’t help it—I’m just honest.” I then proceeded to try and get him to see that while it’s lovely he gives compliments so freely, he doesn’t need to give criticisms in the same manner. I’m not convinced it registered with him.

We have enough negatives in this world without people feeling compelled to be “brutally honest” and thinking it’s an admirable trait—particularly when it is unsolicited.

Honesty is critically important, for sure, but it doesn’t mean we can then thoughtlessly eschew compassion or courtesy in the name of truth (or, more accurately, the truth as we see it).

We absolutely need honesty–but we need to remember that that does not mean saying whatever we feel like whenever we want to.

Imagine a world where everyone said whatever they wanted no matter who they might hurt or offend—oh, wait—I already mentioned the world of Internet commenting. I don’t know about you, but I rarely let myself read comments on the Net because it hurts my heart that people think it’s okay to treat one another like that.

It is not okay.

And I don’t for the life of me understand why some people think it IS okay. Maybe I’m just too sensitive, but if that’s the case, I’d rather be too sensitive than a jerkwad.

All we need to do is think about our own lives and what words help and what words hurt…and then work to offer the helping ones instead of the hurting ones. This is not to say that we should only say words of feel-good fluff and lightness, but rather to think before we speak. Is it a criticism that is asked for? Does it really need to be said? Will it cause someone hurt? Is it anything that the person can change? Does it have a shot at making things better? Worse?

I think back to what a different impact the “lip” conversation would have had without the unsolicited criticism attached to it. Instead of the girl walking away with shoulders slumped, feeling bad about something she has no control over, she would have kept that smile going a lot longer. 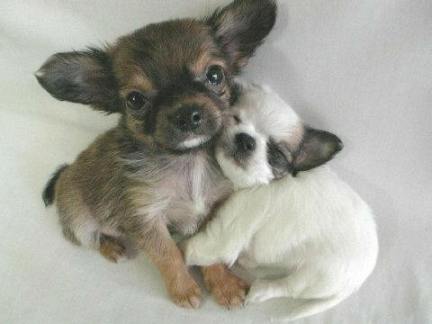 Granted, it’s not our responsibility to fill everyone’s esteem tank, but it sure makes the world a more beautiful place when we choose to do so, and we remember that the choice to be brutally honest is often just another way of being brutal to one another.

We can be so much better than that.