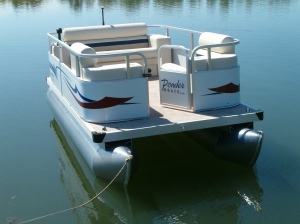 With vacation over Saturday, I already have that “did that really happen?” feeling…The routine of life is back, and I need to remind myself that it was just last week that we stepped out of our reality. While we had a delightful time, there are some memories that I want to stick with me over others.

Every summer we go to a family place in the Northwoods of Wisconsin where we see familiar faces as well as new ones. This year we met a new family through an unusual experience. My husband, Mike, and I were out fishing on the dock one afternoon when one of the pontoon boats was returning. It had been just a few minutes prior that we wondered why there was a new wooden ramp added to the end of the dock, and in a minute, we were about to learn why.

The boat looked like it was headed straight for the end of the dock instead of pulling up alongside of it. I looked at Mike like, “Do these people know how to drive?” and as the boat ran into the dock, I suggested to them, “Are you sure you don’t want to come in on the side?” and the woman who was driving answered, “Well, they said I should come in on the end…” and it was at that moment that I really looked at them and saw that the man on the boat was in a motorized wheelchair. Then it all clicked. The ramp was so that he could get on the boat…and they needed to line up with it so that he could ride off. After I shook off my “dork moment,” I offered to help them dock the boat. Mike and I pulled them in and anchored them as tightly as we could, and then I bent down to pick up the ramp so that it could face the opposite way for the man to drive off the boat.

Problem. The ramp was fastened to the dock. As the man drove to the edge, the boat sunk down much lower than the ramp. What to do now?

Geniuses that we were, we realized that if we all moved to the back of the boat, the pontoon’s front would rise up and as the chair got closer to the edge, it met up nicely with the downward facing ramp. Problem solved, right?!

Yeah…no. We watched the man drive his chair to the edge, meet the ramp, and begin to drive down it. But with the majority of the weight of his chair no longer on the front of the boat, the boat began to rise…and the chair’s smaller back wheels that were still on the boat were lifted up…and the chair sprang forward. It was a slow-motion scene that I saw happening but couldn’t act on fast enough, and we all watched the chair throw the man onto the dock for a major face plant.

Thankfully, the chair—which we later learned weighed 400 pounds—did not land on him but returned to its normal position after jettisoning its occupant. A couple of other guys on the dock saw the fall and came running to help. Obviously, we were all very concerned about the man—now lying with the side of his face pressed against the dock. Kneeling next to him, I asked him if he was okay. He was a bit shook up, but he calmly said, “I’m okay. I’m fine.” Just very matter of fact.

And in that moment, I saw the vulnerability and strength of this guy. It was one of those times where so much seems apparent in just a second. He couldn’t do anything to help himself—he just looked kindly into my eyes and half smiled. Here was a vibrant person, face down on the dock, knowing that’s exactly where he’d remain if it was all up to him. He was completely dependent on others, and there was nothing else to do but accept that and keep doing things…like going on family vacations and taking a boat out with his wife and sons to catch some fish.

Wow. For someone like me, who is striving to be more vulnerable in this world, it was a real a-ha moment. Granted, I don’t really know how this man handles his challenges overall, but in that moment, he was graciously accepting complete surrender.

After we assessed that he was okay, his wife explained that he was 200 pounds of dead weight. We took a collective breath and formed a quick plan of getting the chair in a safe position and then lifting the man back onto it.

With some teamwork, we successfully got him seated and ready to roll. His knees and elbows were banged up, but other than that, he was fine. He took the face plant with amazing grace.

And that’s how we met Jay and Melissa and their two sons.

Melissa shared with us that they go through life laughing an awful lot—because what else is there to do? With the exceptional challenges their family faces, they keep laughing and living and trying in the best way that they can.

The “fish” I caught that afternoon turned out to be some really good soul food.

I’m so glad I got a chance to share in Jay and Melissa’s world even for just a teensy bit. Not only were they lovely people, but they helped me remember that no matter what “chair” you’re in, the best thing to do is just keep on rolling. And when the occasional face plant comes your way, accept help with grace and gratitude, and remember that we are all in this together.

9 thoughts on “Life Lesson Courtesy of a Face Plant”